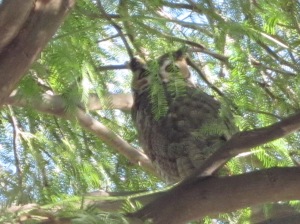 First, I pulled off something I don’t ever try to do: the double run.  I ran 6 miles in the morning and another 5 miles at night.  And unbelievably, the 5 miles was fast and felt better than the 6.  I can’t explain it.  I don’t know why.  But I will take it say THANK YOU.  Now I can have Friday and Sunday OFF (translation: sleep-in).  The only thing really that was sore during and after the 2nd session was my core.  No big surprise there.

Now, the other thing that was AMAZING was even better than the double run. I have to set this one up.  I am NOT a morning person. Don’t talk to me, don’t even look at me.  So when DH came in my office around 5:50am and told me to come with him, my immediate response was cranky.  What do you want? I don’t want to go anywhere with you?  He told me I needed to work on my attitude (true) and to get up and go with him.  So I did.

Anyone that has known me for all of 2 minutes could tell you that wildlife encounters are about the most exciting things I can think of.  Remember the morning I saw the coyote?  It was VERY exciting.  Or the fox the morning we left NC?  So, early this morning, as he was putting out the trash, he noticed something on the neighbors roof.  He said he didn’t think much of it until it moved. And that is when he came to get me. 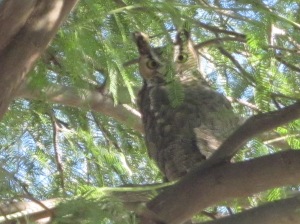 This is what it looked like around 8:00am.  It was originally on the roof.  Then it settled in the tree in our front yard.  It flew to a light pole and then flew away.  HUGE wing spam.  Quiet whoosh of the wings as it flew by.  I figured it was gone.  But when I got back from the morning run, I was putting somet things in the recycling bin and there it was.  I was BEYOND excited.  I have been fascinated with owls for the past couple of years.  Even dragged Barney to the Carolina Raptor Center before we left NC (a cool place if you are in NC).

The trash truck came by and I think that was more than Woodsy (Give a Hoot, Don’t Pollute) or Mr Owl (how many licks does it take to get to the center of a Tootsie Pop?) here could take.  But he was out there for quite a while.  Now I will look for him every morning.  I hope he (she) comes back!

After looking at many pictures on the internet, I do believe this guy (or girl) is a Great Horned Owl.  Just TOO cool.

I am approaching 40 and have been married since my early 20's. I have become more than a little frustrated with having to answer incredibly personal questions about my choice to not have children. It is apparently taboo to talk about religion and politics, but confronting me about my reproductive choices is fair game. It is not a choice I made alone, quickly or lightly. My husband and I made it together. I am not "withholding" children or grandchildren from anyone. There is an astonishing lack of understanding over the idea that it is an actual choice, to have a child or not. There is also an amazing lack of support, discussion and resources for those like me, that have made the choice. This is not a blog for kid-haters, or mocking people for having kids. It is a place where we can talk about living full lives, without kids, and without guilt.
View all posts by nfoste2245 »